The tour was to start at Clarkston, Washington which is across the Snake River from Lewiston, Idaho.  Two cities obviously named for Lewis and Clark.  Getting to Clarkston from Chicago was not easy.  With more frequent service, we opted to fly to Spokane, Washington and then bus to Clarkston.  Even then, we had to connect through Denver.  National Geographic anticipated the airline service issues and provided charter buses to meet us in Spokane and drive us to Clarkston.

We arrived in Spokane a day early on October 14, 2019 and got to spend an evening and a morning as tourists.  I had been to Spokane in 1969 for two weeks to attend U.S. Air Force survival school at Fairchild Air Force Base.  Back then, I was on my way to Vietnam and never saw the city.  So this was really a first.

We checked into the Davenport Tower Hotel.  It was too late to do much walking around, so we grabbed dinner in the hotel and went to sleep.

We got moving pretty early and started walking to explore the city.

Our first mission was to find breakfast.  We did not want to eat in the hotel so we walked in search.  A local postman pointed us to Molly’s Family Restaurant.  What a great recommendation!  This had the flavor of a local diner with loud, fast-talking waitresses.  The food was delicious and abundant.

We next visited the park along the Spokane River.  Many people were already up and jogging or walking.  The scenery was beautiful, especially with the fall colors.

We noticed the availability of a cable car ride over the falls and down the river but it didn’t open until 10am.

We began to explore the Riverfront Park on foot.  It is located along the Spokane River and has several bridges.  The view from the park looking down to the river is just spectacular.

There are multiple falls and we just loved the views and the fall colors.

Naturally, Spokane has utilized the steep drop of all this water to generate hydroelectric power.

Finally it was time for the gondolas to start offering rides.  We were second in line and climbed aboard.  The ride was smooth and the views spectacular.

After the gondola ride we had some time to wander downtown Spokane and visit the indoor mall downtown.  This shoe was a very prominent display in the center of the mall.

After touring the mall, we went back to the hotel and caught a shuttle to the airport to meet the Lindblad Expeditions/National Geographic bus to take us to Clarkston.

There were three busses and numerous other tour members at the airport.  We got on the first bus and headed south.

As we approached Clarkston, we could see the Snake River below where our boat was docked.

The bus dropped us at the boat which was the ‘National Geographic Quest’.  We later learned that this was its last trip down the Columbia River (at least for this season) and following our voyage was to head to Central and South America with a stop at the Panama Canal.

And here was our room.  It was on the lowest deck, in the back, right above the engines.  Oh well.  We were very late making our reservations.

And the view from our porthole:

We arrived late in the afternoon with no time to get off the boat and explore.  Instead we got comfortable with our cabin.

The first item on the agenda was an ‘abandon ship’ drill.  We put on our life vests and marshaled to the lounge for a safety briefing.

Following that, we went back to the lounge to enjoy a cocktail and meet some of our fellow travelers.  This was followed by dinner on board.

The next morning, following breakfast, we were met by jet boats to take us up the Snake River.  Jet boats have a very shallow draft and are able to power up over shallow rapids that would ground ordinary motor boats.

We stopped at Hells Canyon which was a small ranger outpost.

As we continued up the river, we saw wild goats moving up and down the hills on either side of the river.

With the jet boat we were able to make it up through several rapids.  Eventually, we came to a fork in the river.  From here, the river became too shallow to proceed, even with the shallow draft jet boat.

We stopped for lunch at a Nature Conservancy site.  The couple, who served us lunch, lives here year-round and practices subsistence level farming.  There were many examples of old farming equipment that had been used in years gone by.

After lunch we toured their orchard and then relaxed before continuing our journey.

Following this respite, we got back on the jet boats and continued the trip back downstream to the Quest.

Every evening, following dinner on-board, we heard from various speakers.  This first night we heard some stories from a Native American.

As night fell, the Quest pulled up anchor and began our journey down the Snake River.  Everyone was fascinated as we entered the first of eight locks through which we would pass.

Each of the locks had a different design.  After we entered the lock, a barrier was raised behind us.

Once the barrier was up, the water was released and the Quest lowered to the downstream water level.

Once the water levels were equalized, the downstream gates were opened and we proceeded.  This voyage would take us through eight locks, four on the Snake River and four on the Columbia River.

After traveling down-stream overnight, the Quest weighed anchor for the day near the Palouse Falls.

Following breakfast, we boarded Zodiac boats in small groups to head to a dock where we were met by buses.   The buses took us to a park overlooking the Palouse Falls. The falls and the surrounding geology were truly fascinating.

As one looked downstream from the falls, the layers of Basalt and the erosion over centuries became obvious.

There were massive floods in the early geologic history of this area that carved these beautiful formations.

The park that accompanies the Palouse Falls includes a campground.  As with any campground, there are rules.  Here Pat points to the rule about rattlesnakes that got our attention, even though we were late in the season and most were in hibernation.

Following lunch aboard the Quest, we returned to the Zodiac boats for a trip up a tributary.  Along the way we saw swallow nests attached to the sides of rock formations.

These Zodiac boats held about six people and were a lot of fun to get around in.

Back on the Quest, we continued downstream.

The next lock on the trip had a lift-gate design rather than swinging doors.

During cocktail hour we had a presentation by Lindblad staff on photography.  She covered some very fancy cameras with two-foot lenses and also those of us with iPhone cameras.  It was very well done and following the lecture she wandered the room to answer individual questions.

After dinner, we returned to the lounge to hear from our resident historian about the Lewis and Clark expedition.

We spent the morning in transit aboard the Quest.  Our first lock was the McNary Lock which was beautiful with the sun over our shoulders.

Following lunch, we again boarded Zodiac boats for a short trip to a local park to get some exercise on a fairly long hike to the top of a peak and back down.

That evening aboard the Quest, we again heard from our resident historian.

This was our first and only day of rain.  We were lucky.

Following breakfast we had three choices for morning exploration.  We could tour the Columbia Gorge Discovery Center.  We could walk the Mosier Tunnels.  Or, we could visit the Western Antique Aeroplane and Automobile Museum.  We chose the latter.

The Western Antique Aeroplane and Automobile Museum (WAAAM) is not only a fabulous collection of antique automobiles and early airplanes, it is also an active workshop where these vintage vehicles are restored.

Below is an early version of the LINK trainer. These were used to train pilots on the basics of controlling an airplane.

We were not disappointed.  This was an amazing collection.  As a pilot, one could step back into the early days of aviation and appreciate the simplicity (and terror) of stick and rudder flying in a machine made of balsa wood coated with fabric.

I was especially amazed at the early LINK trainer.  How anyone learned to fly using that contraption is beyond me.

A short bus ride away we were served lunch by volunteers at the headquarters of the Crag Rats, Hood River, Mountain Search and Rescue.  These folks perform search and rescue operations for all of the mountain climbing and white-water rafting activities in the area.

Following lunch, we bused back to the Quest, weighed anchor and proceeded further downstream.

During a light rain we got to see a full rainbow, from one end to the other – – a first for me.

Next we came to the Bonneville Lock.

Following dinner, the evening presentation was by a National Geographic naturalist who discussed the life cycle of Salmon in the area.  The locks and dams have interrupted their normal life cycle and there are now hatcheries along the river trying to increase the number of Salmon swimming upstream.

This was our last full day of travel on this expedition.  The Quest took us down the Columbia River to the edge of the Pacific Ocean.  Here, over 200 years ago, Lewis and Clark met their objective of finding a route to the Pacific.

We crossed the bridge and parked at Cape Disappointment.

We took a short walk to the beach where we could see where the Columbia River meets the Pacific.

Fort Canby was constructed to defend the entrance to the Columbia River from enemy warships.  U.S. Army troops manned the fort from the mid-19th century until the end of World War II.

We then took a short bus ride to the Lewis and Clark Interpretive Center at Cape Disappointment.

Here we learned how treacherous it was to navigate the mouth of the Columbia River.  Apparently the river bottom is constantly shifting which makes navigation extremely difficult.

Below is the light house at the entrance to the Columbia River.

For all intents and purposes, this was the end of our journey.  We returned to the Quest for dinner and one last night aboard.  The ship headed back up the Columbia overnight to dock in Portland, Oregon.

This was a busy morning.  They wanted everyone off the Quest by 8:00 am.  The ship had been refueled the day before.  Many of the National Geographic crew members were leaving for the season.  The ship was taking on new crew and staff for its journey to the Panama Canal which was to start as soon as they got us off.

We had a flight from Portland to Chicago at 11:15 am so we were ready to get moving.  It was a short walk from the Quest to the buses waiting to take us to the airport.

Following Lewis & Clark2019-11-242019-11-24https://www.vgordy.com/wp-content/uploads/2016/04/island-travel-logo.pngDiary of Selected Tripshttps://www.vgordy.com/wp-content/uploads/2019/11/image013.jpg200px200px
About
Vaughn Gordy
Vaughn Gordy and his wife, Patricia Mulcahy, travel the world. Rather than bore our friends and relatives with slide shows, we choose to make the photographs and log entries available on this website. We welcome your thoughts. 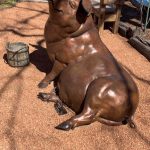