Visit to Pittsburgh for a 90th Birthday

The occasion was my father’s 90th birthday. His actual birthday was on May 31st, but the celebration was June 5th. Not many people get to mark this milestone but in my father’s family, it is not that uncommon. My father’s father lived to 103 and was alert, charming, and living in his own home until the day he died.

The event was to be a surprise. All of the grandchildren and their spouses or significant others flew to Pittsburgh for the party, including Christopher whom we hadn’t seen for many years.

We arrived on different flights during the evening of June 4 and settled into spare bedrooms and hotel rooms.

On the morning of June 5th, Pat and I made a quick trip to Lowe’s to pick up flowers for my father’s rock garden. All of the out-of-town visitors had agreed to plant the rock garden as a special gift to my father. Pat bought all of the flowers as her birthday present.

With flowers in the trunk, we stopped at my brother’s house to assemble the troops. Here we discovered that the day could not begin for my boys without a visit to McDonald’s for breakfast. 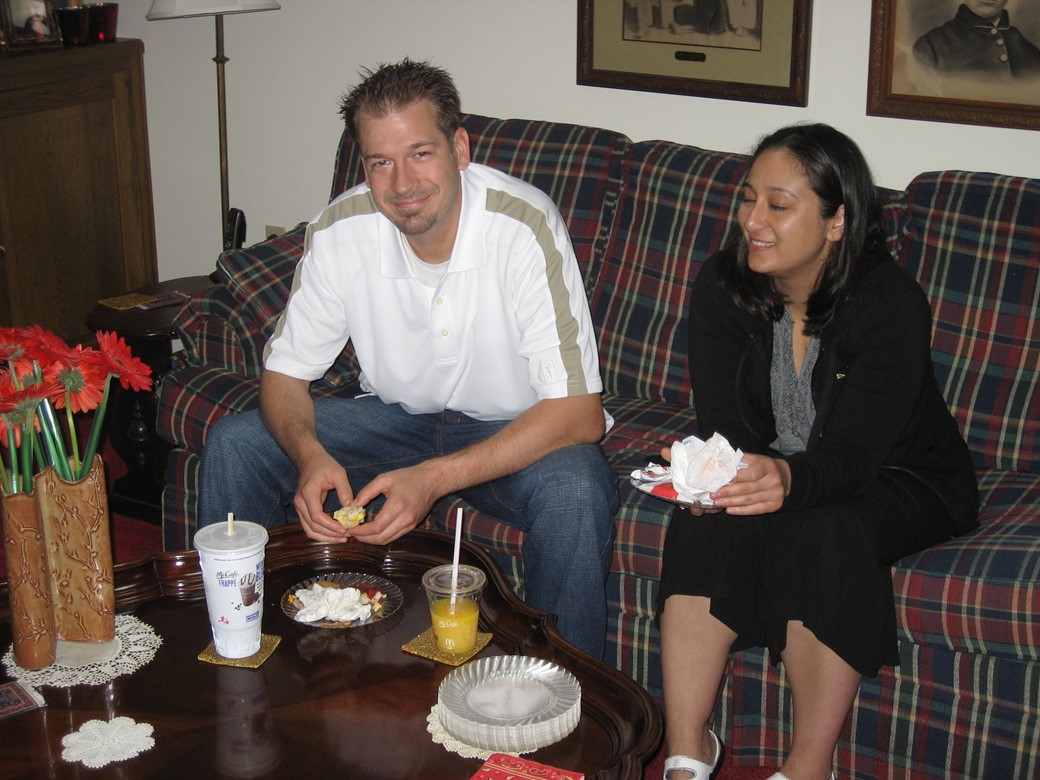 With that out of the way, we loaded into the rental van and headed to my father’s house to do the gardening. Here we discovered that he had already left to visit my mother in the nursing home so we went to work without him. 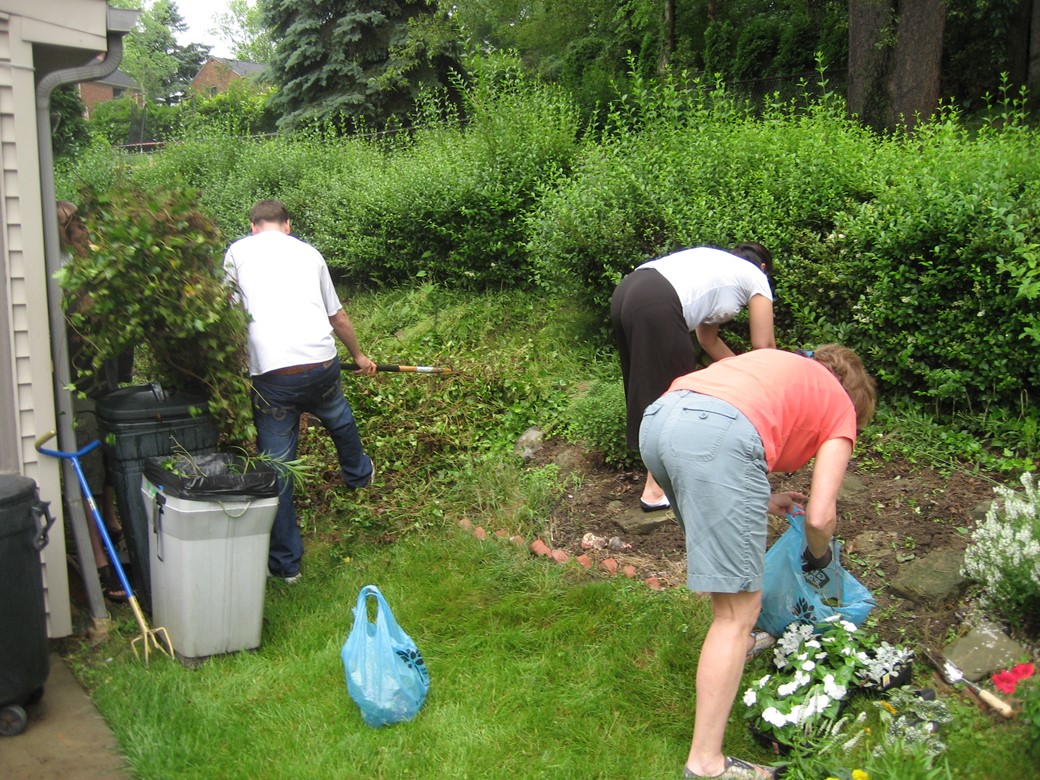 The first chore was to clear the weeds in the garden and the ivy that had over-grown the stairs. Above in the background, there are stairs under that ivy that Dave is digging up. 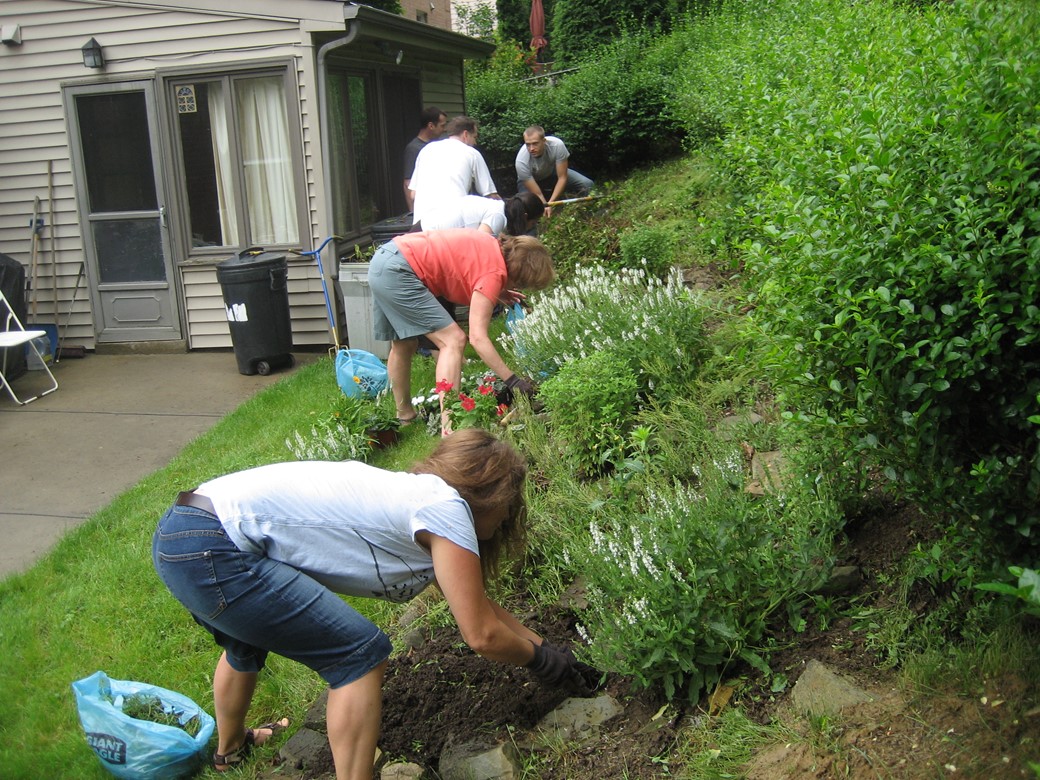 All hands put on gloves and went to work. 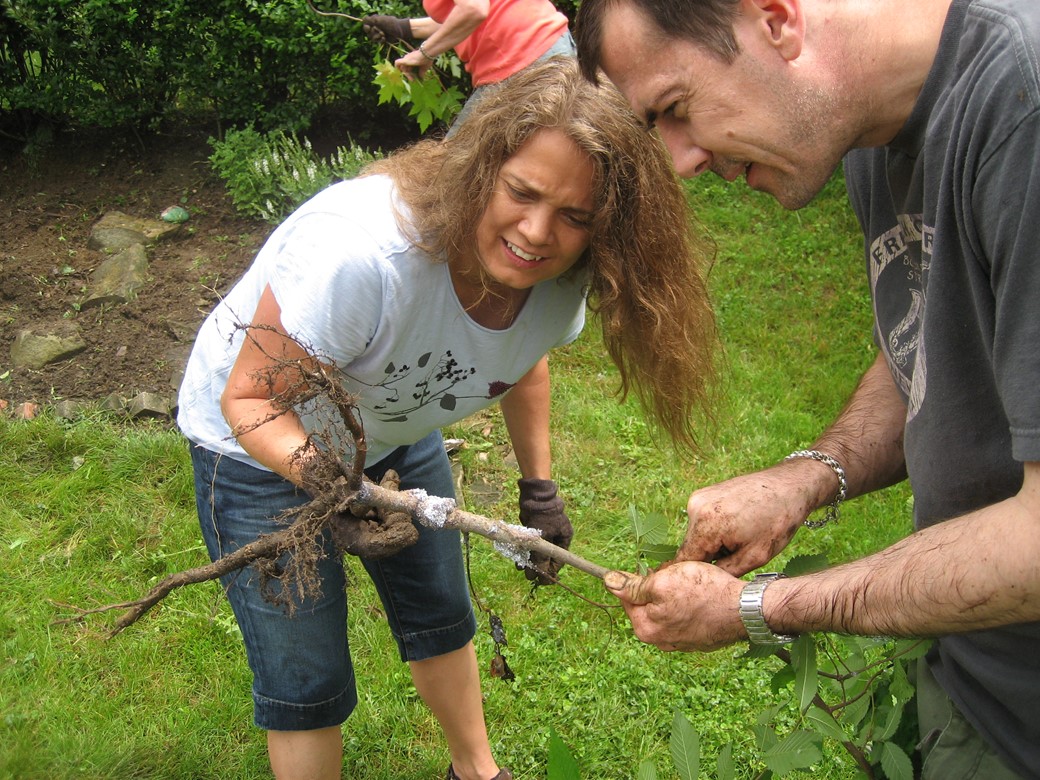 Jeff pulled up a weed whose root was covered with insects. Wendy is a science teacher and is examining Jeff’s find. 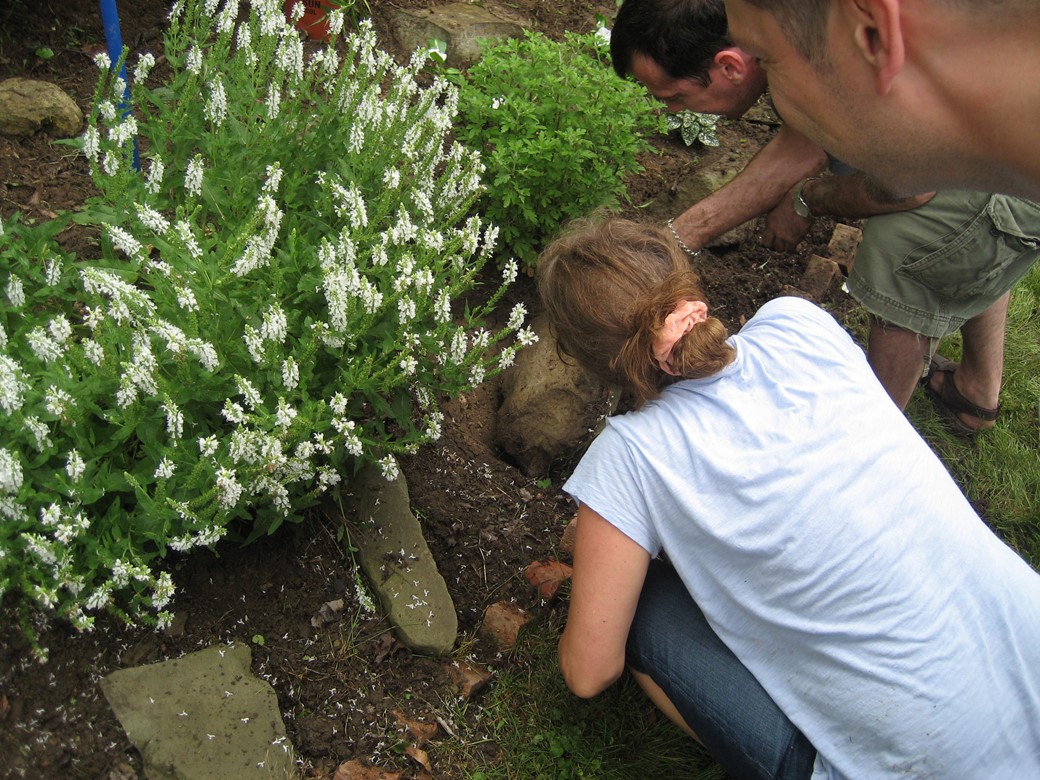 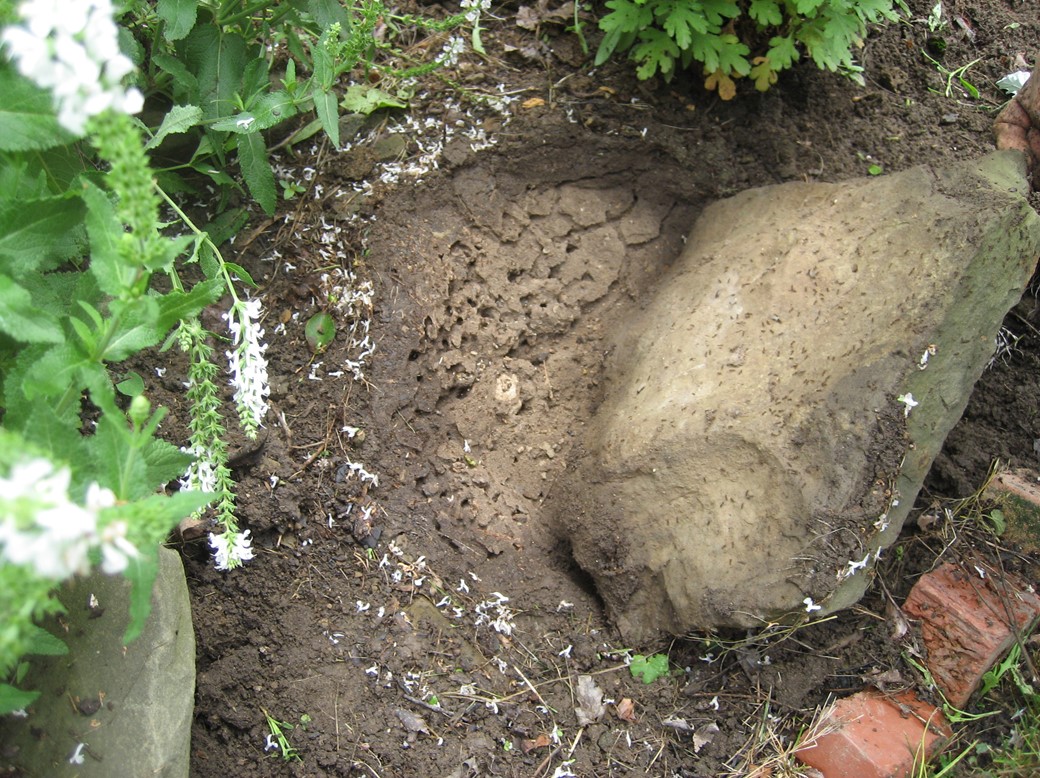 Above, we discovered a large ant colony under one of the rocks. 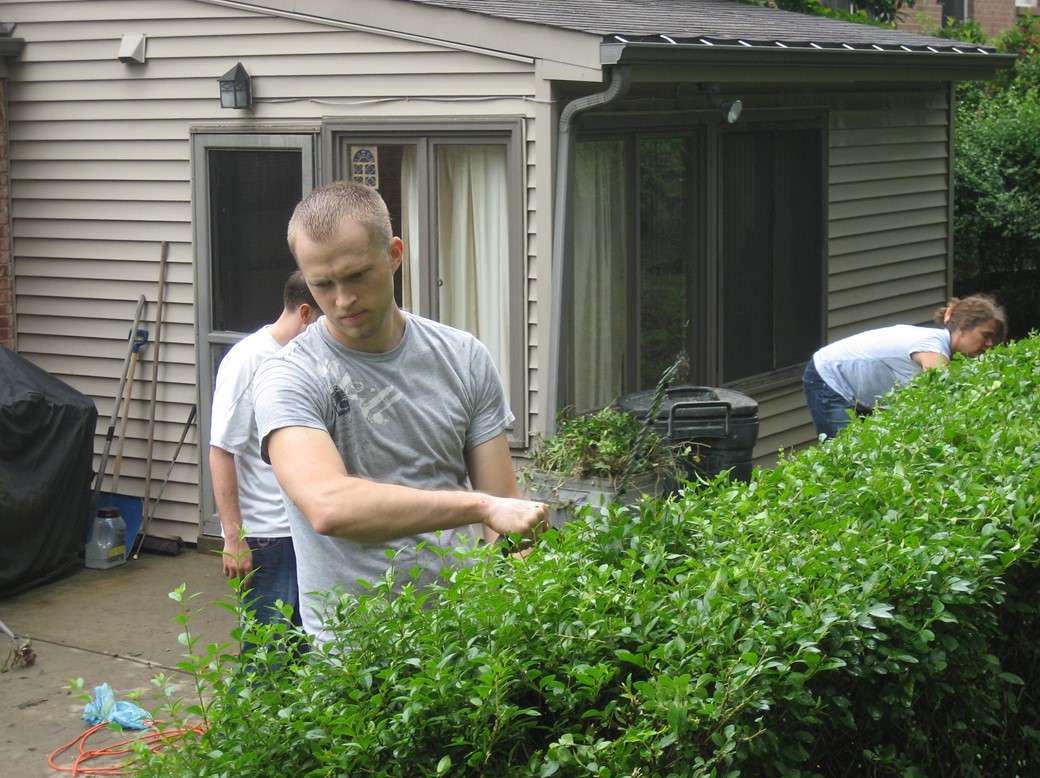 While others were weeding and planting, Christopher set about trimming the hedges. We later learned that my father had lined up two different neighborhood boys to trim the hedges, but neither had showed up. He was most delighted to get those hedges trimmed. 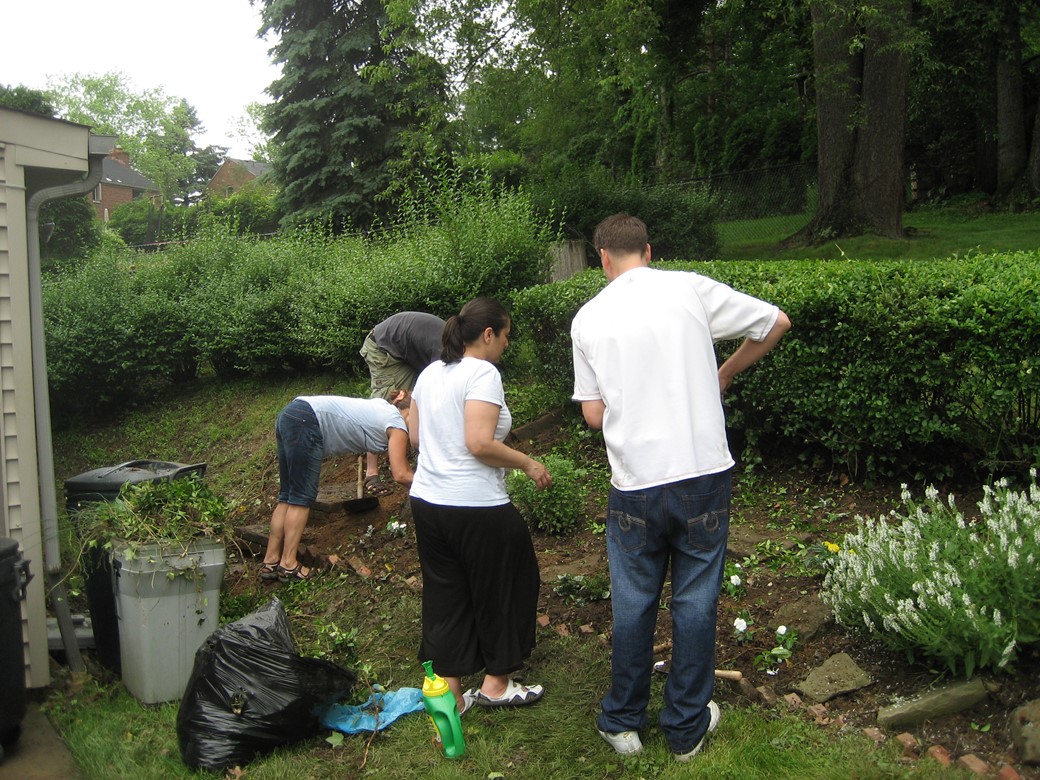 Above, Dave and Sonya have begun the planting process. In the back, you can see that the stairs are beginning to be revealed. 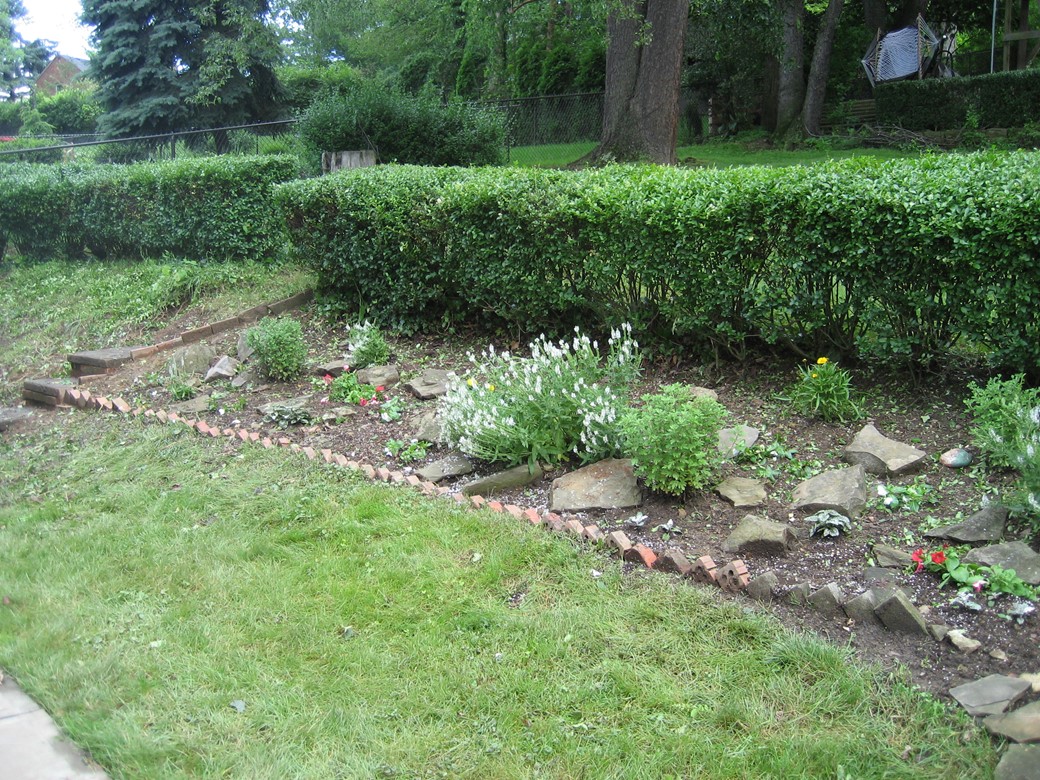 And finally, the finished product. The stairs are cleaned up, the hedges are trimmed and the flowers are planted. Jeff even took the time to fix the angled brick edge at the front of the garden.

Now it was time to clean up, shower and change clothes for the afternoon birthday party at Steve and Sharon’s house.

By the time we arrived, most of the guests were already there and the party was in full force.

Ed, below, is a friend of my father’s since high school and was kind enough to visit for the party. Ed’s daughter Suzy managed the transportation. 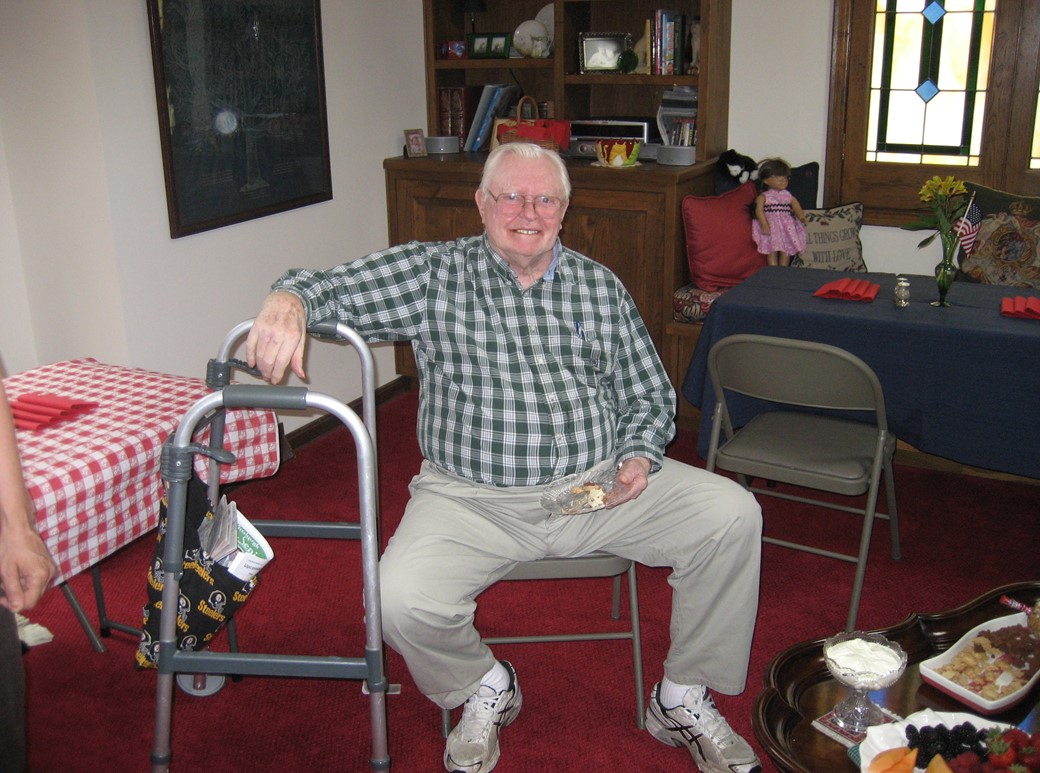 Pat and Ed trade stories of being Irish and visiting the mother country. 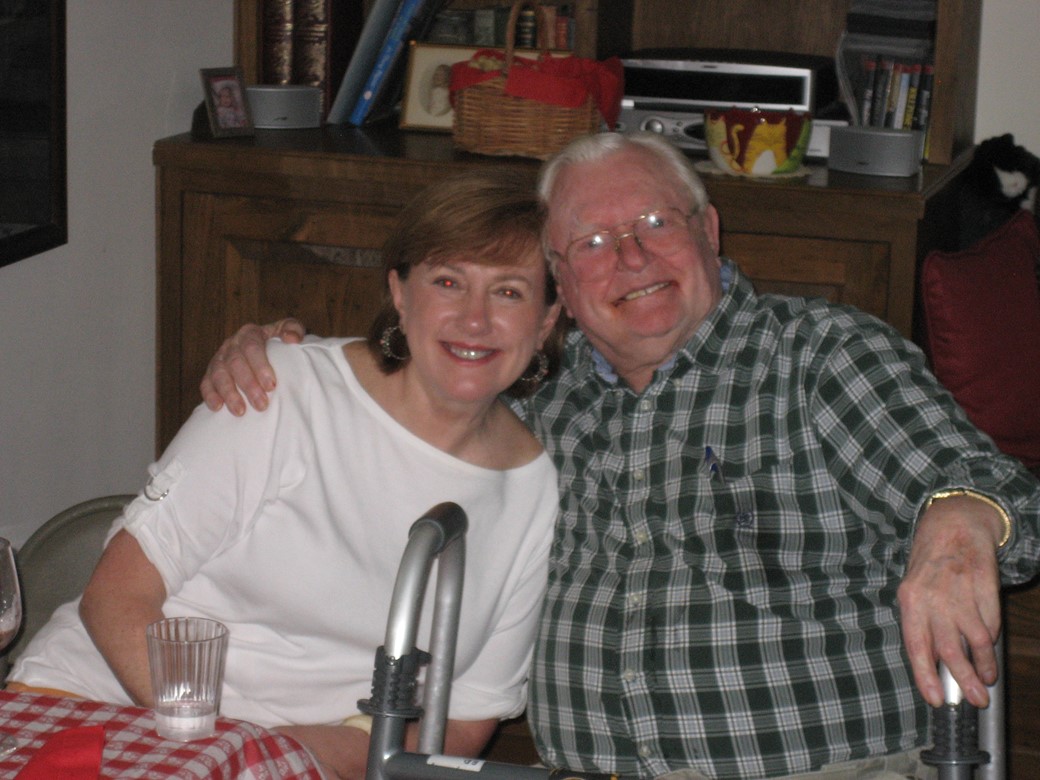 Jeff with his great aunt Cindy. 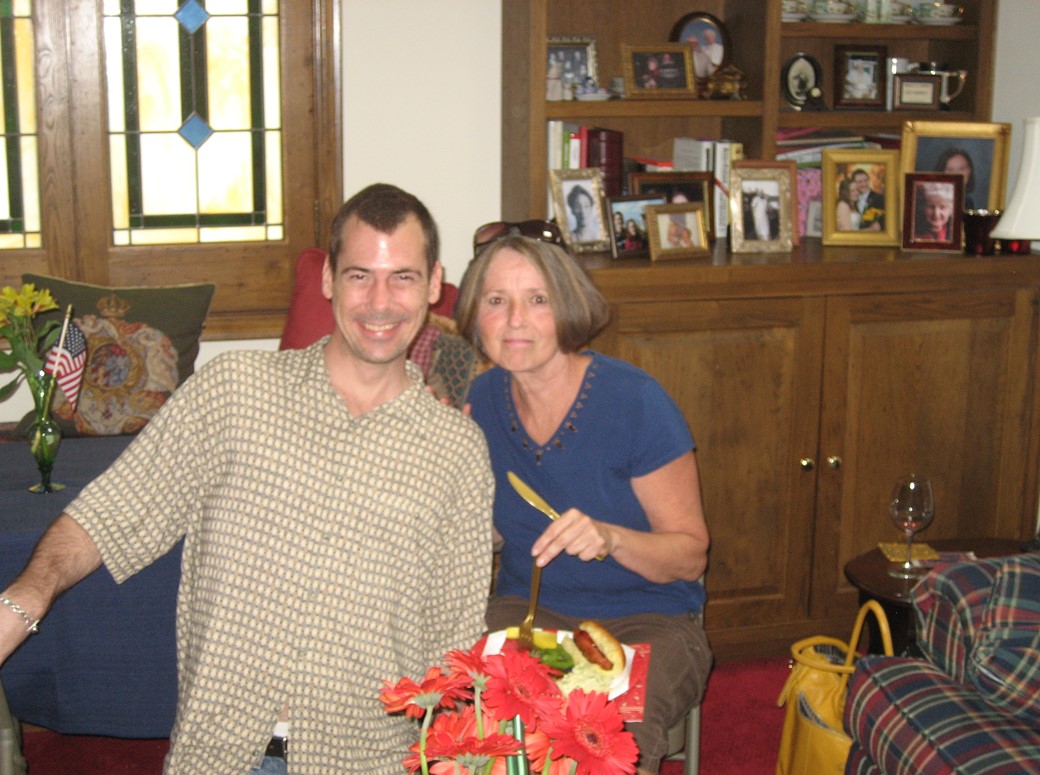 Ginny, below on the left, is another high school friend of my father’s and it was wonderful of her to come to the party. 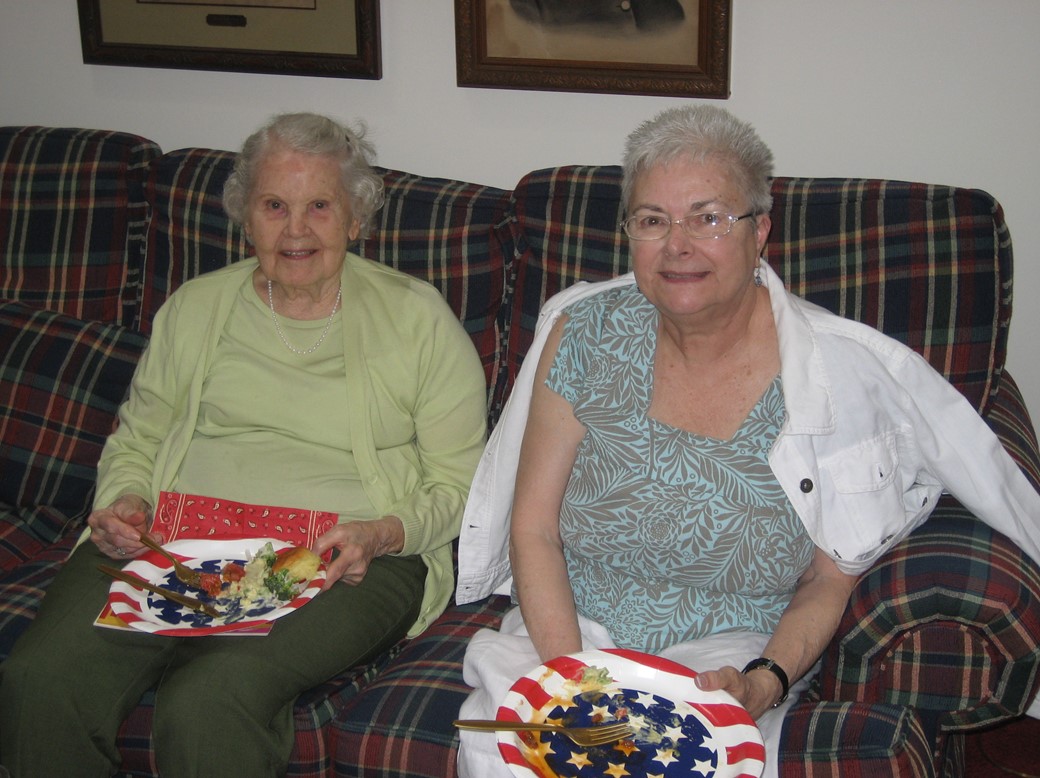 Dave and Sonya are behind Ed. 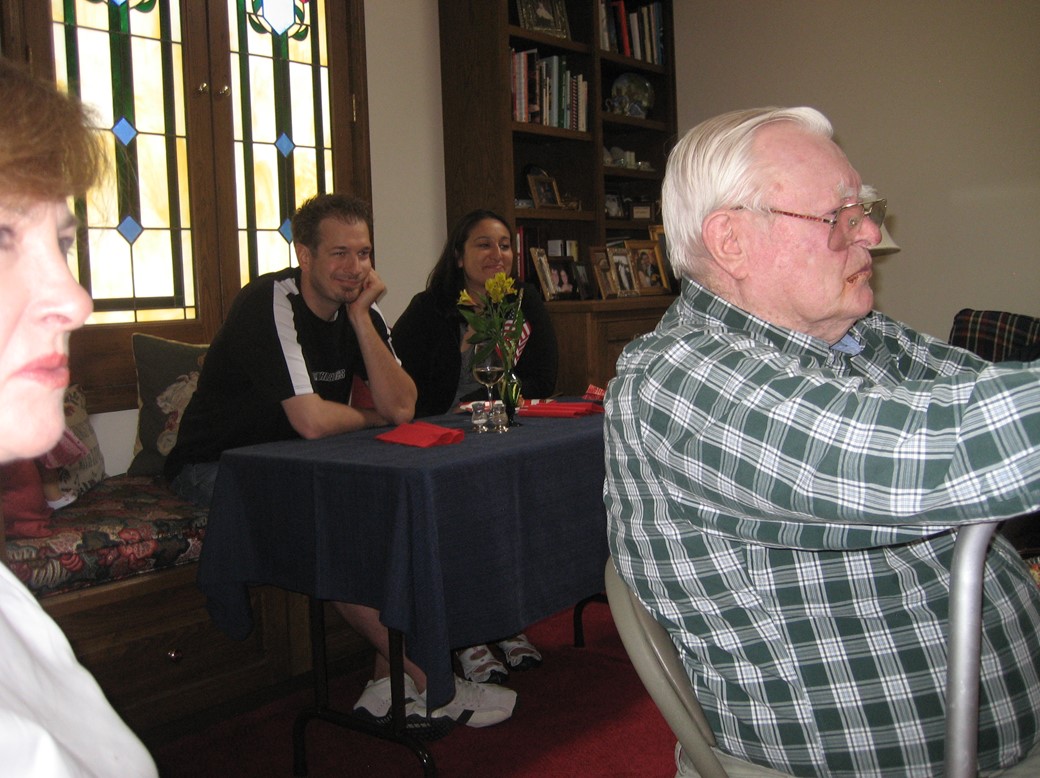 Wendy and Jeff with my Dad in the background. 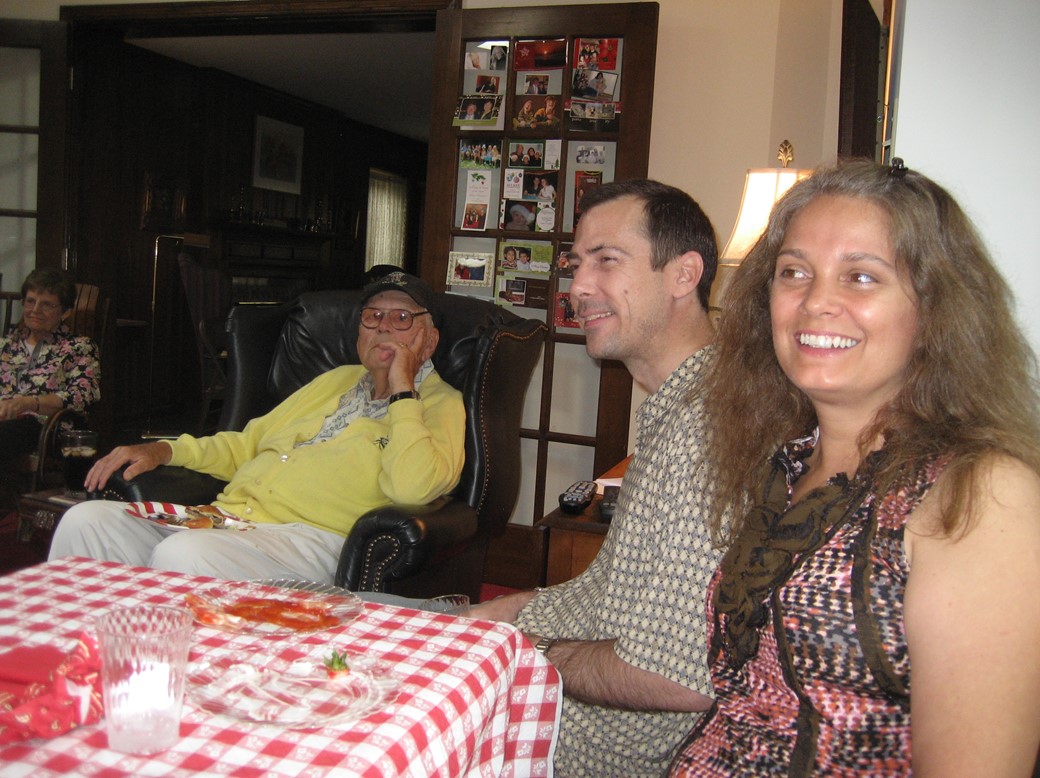 Below, Andy Young joins Ginny on the couch. 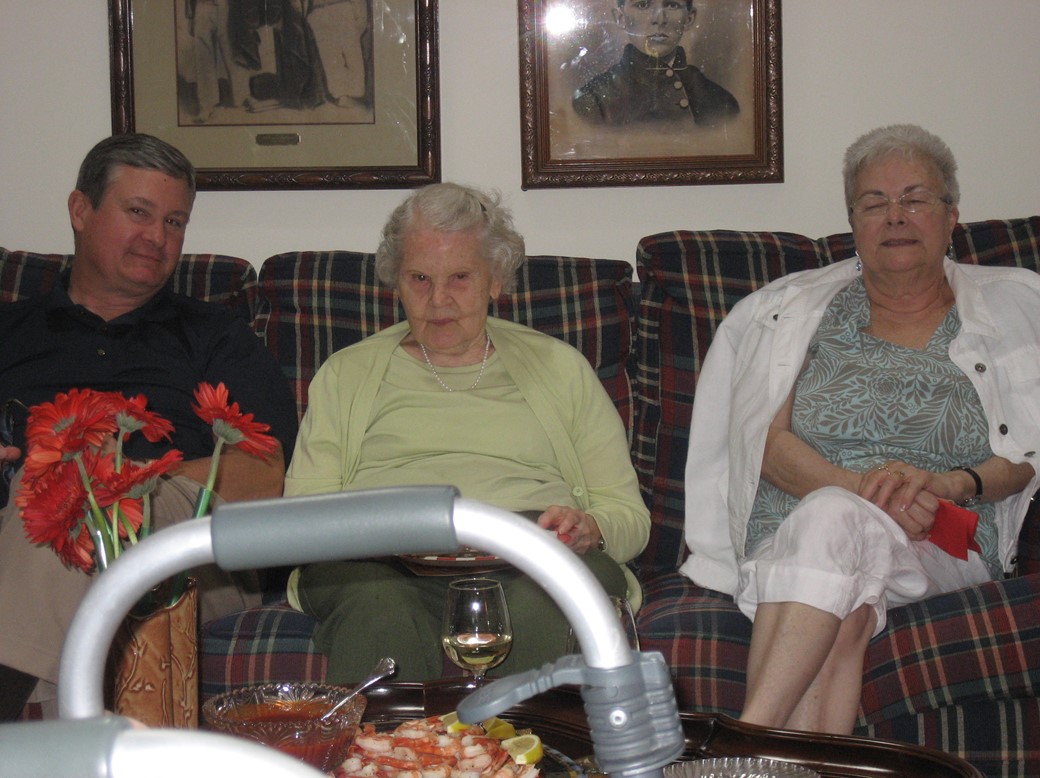 Susan comes in close to give Grandpa a hug. 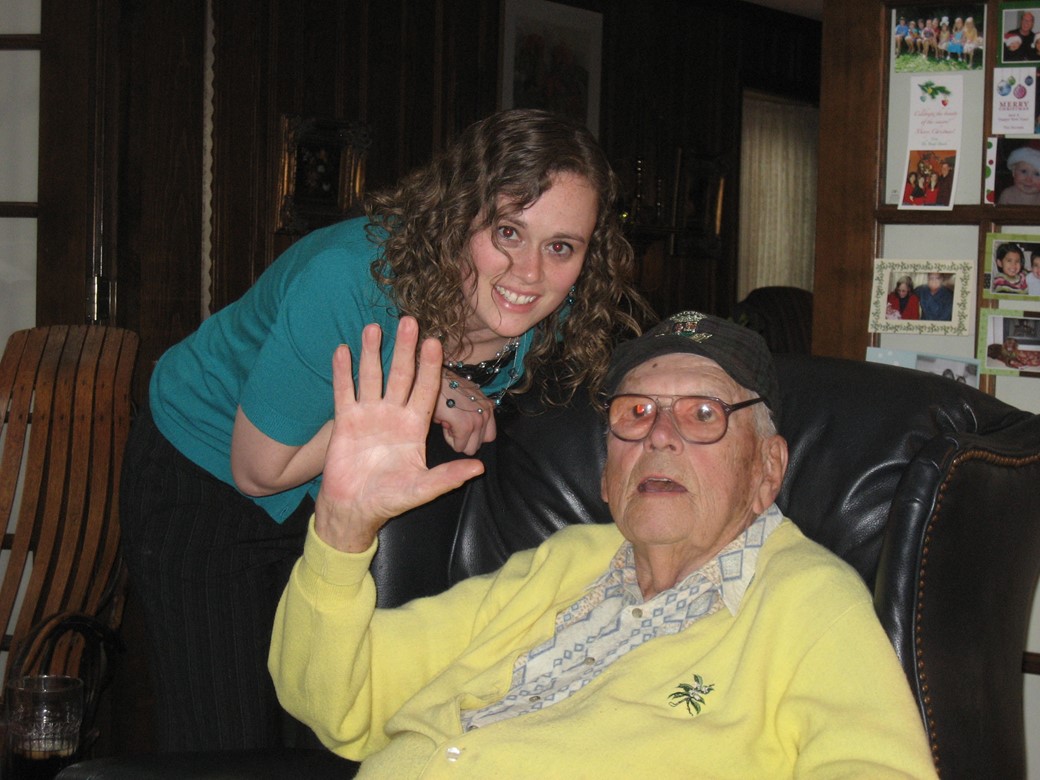 Below, David and Wendy compare notes on teaching school. 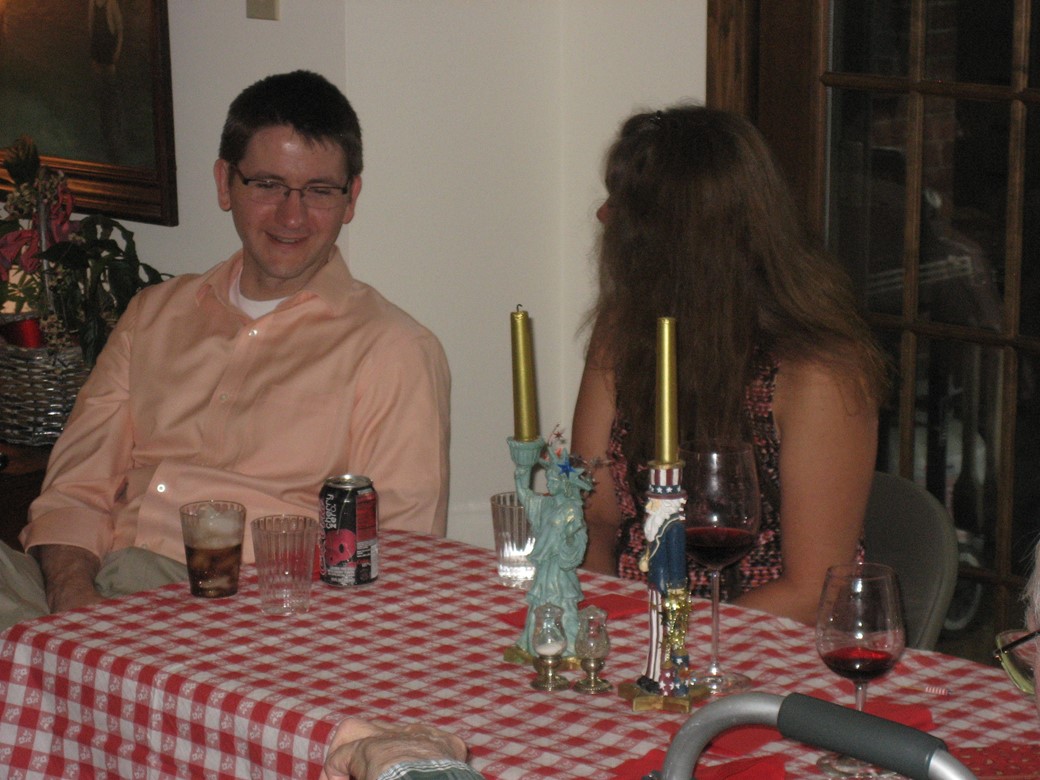 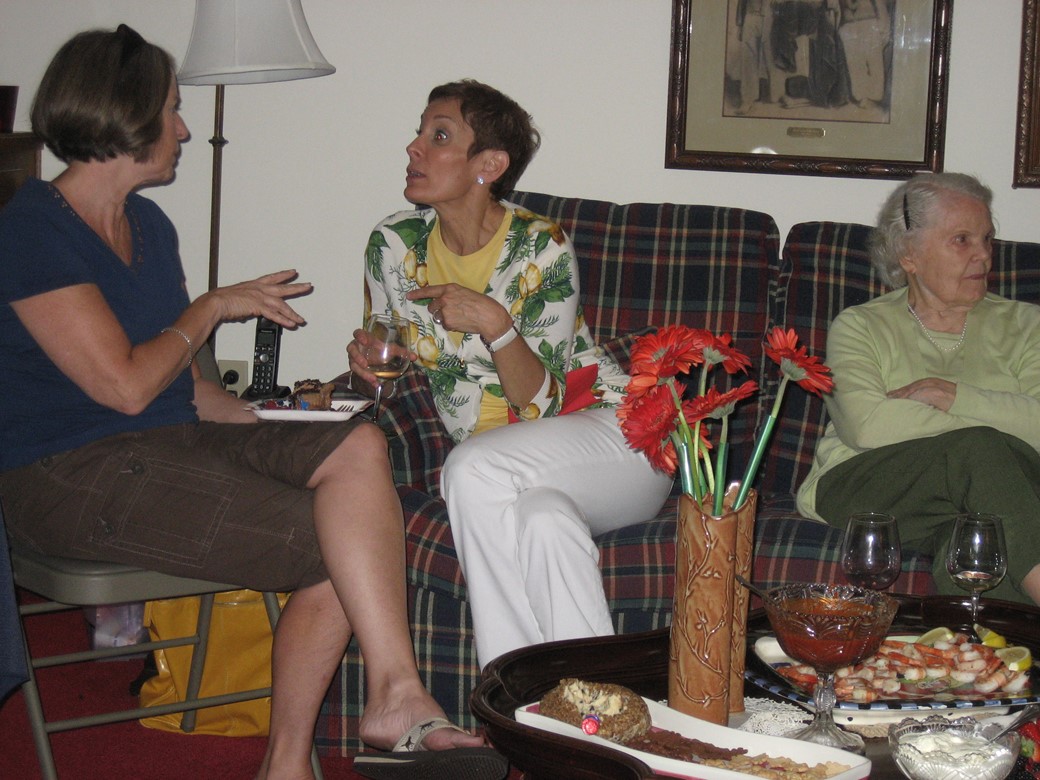 Below, Steve makes an attempt to straighten Jeff out on his politics. 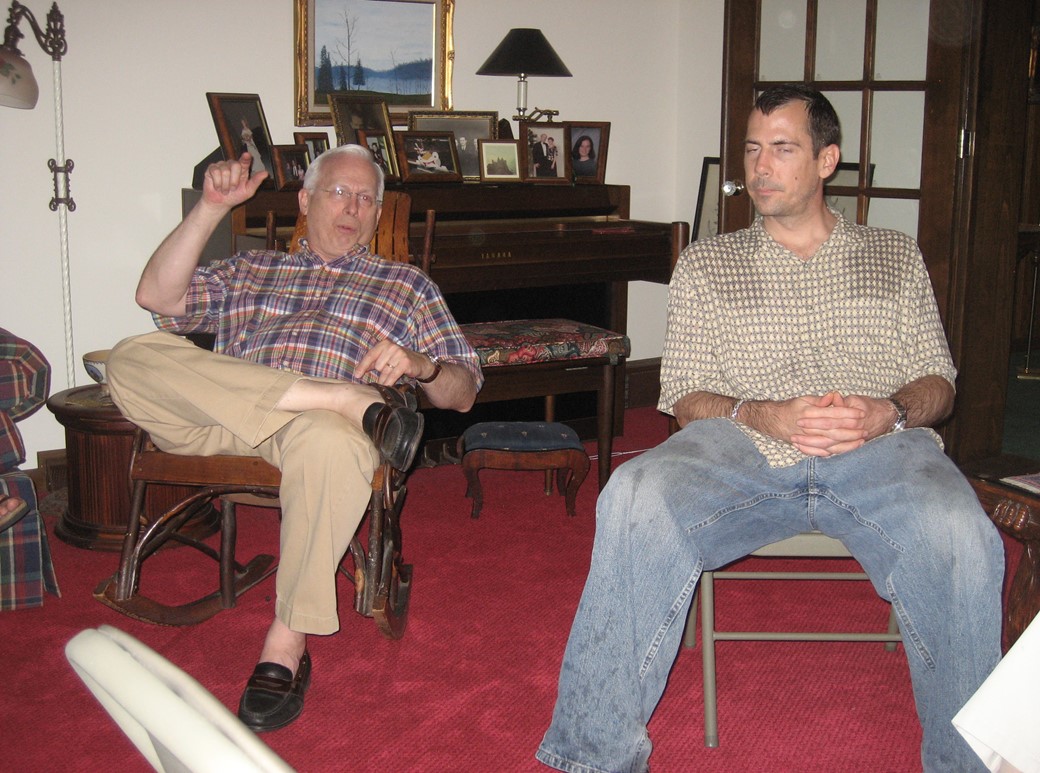 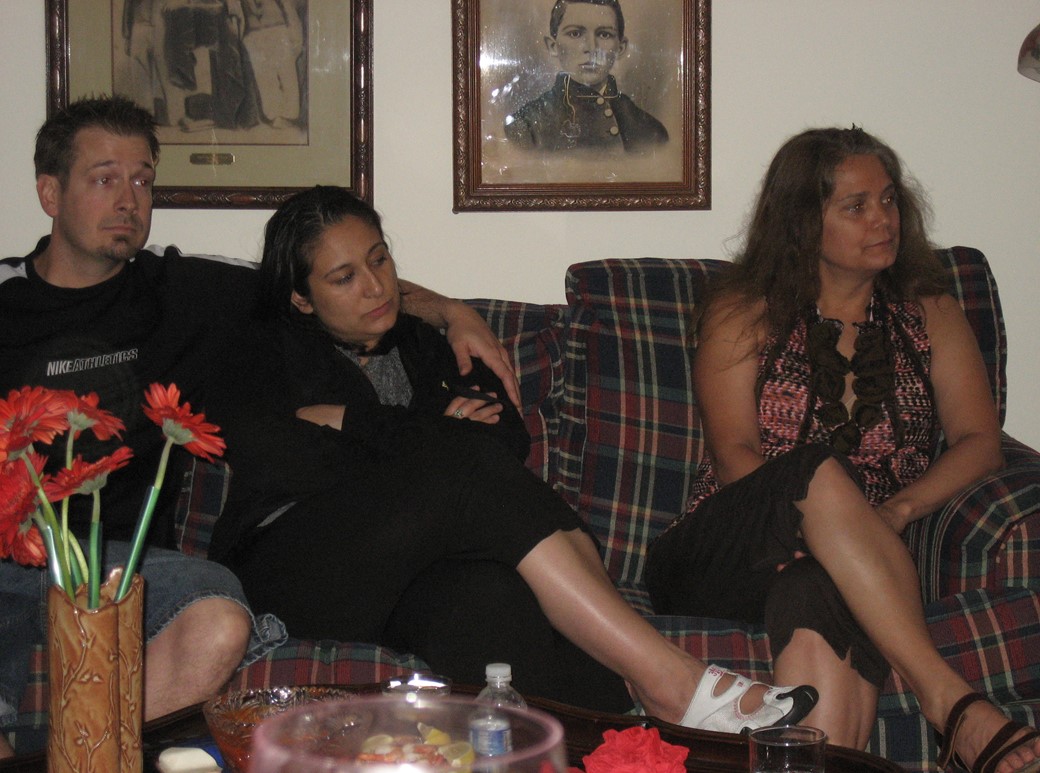 Sharon had prepared wonderful dishes and baked a special cake. The birthday party was a huge success.

The party finally ended. It was raining outside and everyone was full of delicious food and exhausted from the travel, the gardening and the socializing. Those of us staying in the hotel boarded the van along with my father and departed. When we dropped him off at his house, he got his first look at the trimmed hedges and the newly planted garden. He was thrilled.

We left him to enjoy the rest of the evening in peace and quiet and we returned to the hotel.

The hotel experience was a disaster. Apparently due to the rain, the power failed in the middle of the night. The air conditioner ceased along with the clock and the lights.

In the morning we took showers, shaved and brushed our teeth with what little light was available from outside. We also discovered that the elevators weren’t working, requiring us to walk down six flights of stairs with our luggage.

We arranged for all of the children, grand children, spouses and significant others to have breakfast at Bado’s. We managed to get all eleven of us around a table for eight. 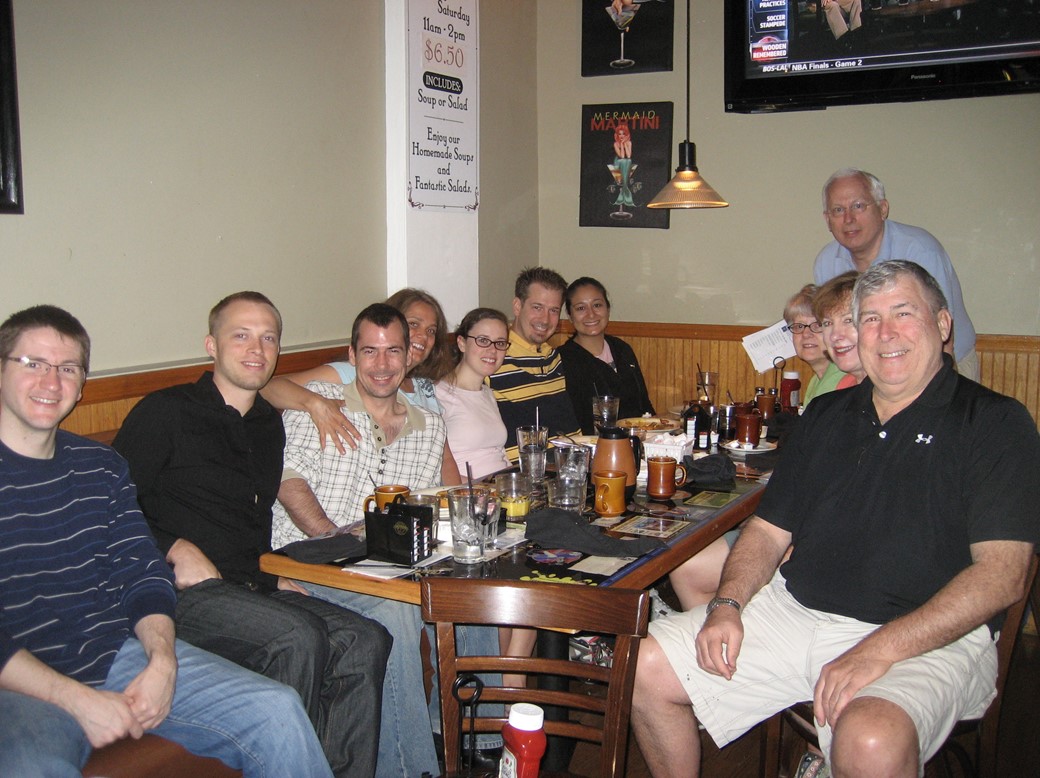 With breakfast behind us, we went to visit my father one more time. He was on his way to see my mother at her nursing home so we all connected there.

The whole gang was able to visit at the nursing home and we said our goodbye’s to my mother and father. We then returned to Steve and Sharon’s house for more conversation before leaving to catch airplanes.

This was a wonderful family weekend that none of us will ever forget. My father got to celebrate his 90 birthday surrounded by his family. This was to be the last time we would see my mother who passed away four days later on June 10.

That only made the weekend visit more meaningful for all of us.

Visit to Pittsburgh for a 90th Birthday2010-06-042019-05-28https://www.vgordy.com/wp-content/uploads/2016/04/island-travel-logo.pngDiary of Selected Tripshttps://www.vgordy.com/wp-content/uploads/2016/04/040816_1724_VisittoPitt17-672x372.jpg200px200px
About
Vaughn Gordy
Vaughn Gordy and his wife, Patricia Mulcahy, travel the world. Rather than bore our friends and relatives with slide shows, we choose to make the photographs and log entries available on this website. We welcome your thoughts. 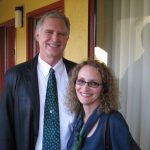 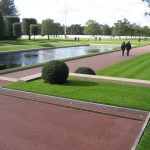